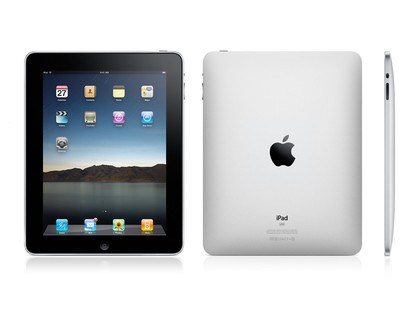 Looking at the 9.7 inch diagonal span of the Apple iPad you may wonder if it is just a magnified version of the iPhone. But the exhilarating experience that you get with this large, stylish touch screen doesn’t end with the display size.

What’s Great About the iPad

True to the Apple design, the iPad is sleek at 0.5 inches thick, stylish with a curved aluminum back and makes reading eBooks and flipping photos a thing to show-off. The treasure chest of applications is preloaded with 12 applications like Maps, which is an interactive version of Google Maps.

A largely popular iPad features is the iBooks platform where you flip the pages of your eBook just like a regular book. You can bookmark, check a dictionary, relish the color display for illustrations and seamlessly zoom in and out. Critics liked iPad’s compatibility with several eBook vendors such as Apple, Amazon and Barnes & Noble in comparison to a Kindle which only supports Amazon or a Nook that’s tied only with Barnes & Noble.

With 10 hours of battery usage time and powered by a 1GHz Apple A4 processor the iPad makes web browsing an absorbing experience. The large buttons on the keyboard work better with the iPad in the horizontal position and Apple’s $39 case can be used to prop up the screen for better viewing. The 1024 x 768 resolution screen is fingerprint resistant and has a home screen lock button that prevents switching from portrait to landscape when you move your iPad around.

What NOT Great About the iPad

It makes me feel un-intelligent when I begin to count the major flaws of the iPad because they are in stark contrast to the main benefits of the device.

One of the biggest shortcomings of the iPad is that it does not support Flash. With the screen size perfect for viewing and downloading, not having Flash is like having a yacht with no sail. A lot of websites still use some kind of multimedia and when this fails to show on the iPad, it feels like pinches.

The other ironic deficiency of the device is that while it makes photo viewing great, it itself doesn’t have a camera or video recorder. Enthusiasts have found paired applications that you have to download on your iPhone and iPad to sync them, thus using the lens of the iPhone and the display of the iPad. Not impressive.

The antithesis continues with the lack of multitasking in the iPad. You can browse, work with the fascinating Apple applications on the iPad, but only one at a time! The device handicaps you by not letting you listen to music while writing an email. This puts a big question on the gadget that touts superior browsing as its main offering.

Okay, so how much does the iPad cost? 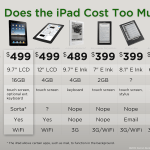 The product range starts at $499 but even after that price you tend to feel that your purchase is bare. Starting with the iPad case and the USB power adapter, there are a host of accessories that you may need and will have to purchase additionally.

To summarize, Apple has made a significant contribution to the still nascent internet tablet industry and that’s great for technology. The price is a little steep for the package but if you don’t mind shelling extra every time you need something (which is not new with Apple but more frequent with the iPad) then you can have an impressive experience.